Following our article in July, we’ve had a huge response to the call for donations to help carry out short term repairs to the most damaged section of Avoncliff weir, which are estimated to cost around £20,000.

Who has donated to the project?

The community led project, with the Town Council primarily acting as facilitator, has attracted  donations from private individuals, totalling around £9700 at the time of writing. In addition, a £1,000 grant has been made by the Canoe Foundation, a national charity supporting access to waterways for sports activities.

The Bradford on Avon Preservation Trust have also pledged up to £10,000 to help to make up any shortfall in private donations or other funds which will be called on as needed.  Finally, the Town Council itself has earmarked up to £3,000 as a project contingency, in addition to providing significant project management and logistical support, liaising with stakeholders including the landholder on the south bank of the river where the repair work will take place, the Environment Agency and engineers. 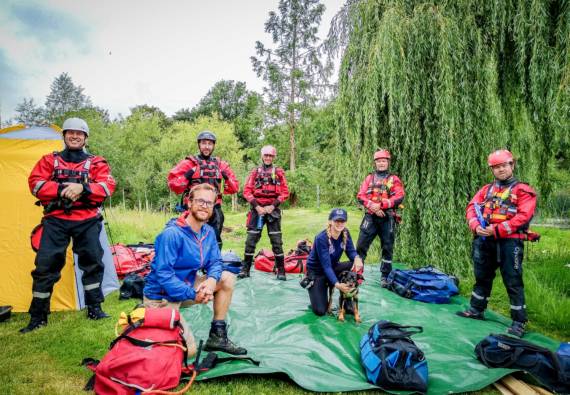 (Pictured above: Serve On volunteers along with engineer Oliver Norton. Photo by Simon Kay) 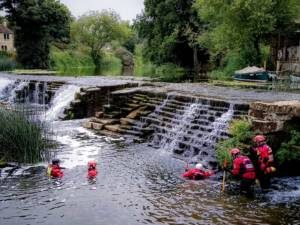 The Town Council is liaising with  Serve On,  the charity  which  is undertaking the in –water element of the repairs and who have recently been at the weir assessing logistics.

You can read our previous article HERE following which we received a number of enquiries, so have now produced some FAQs which we hope will clarify details of the project for those wanting to find out more.

Why isn’t the whole weir being fixed? There is a hole on the north side also.

The owner of the north side has not given permission for the project to undertake that repair.  However, the critical work is the large hole on the south side.

Have both mill owners been  consulted?

Yes, this is a community project and participants from the project, including the BoA Preservation Trust and the Wiltshire Councillor for  Winsley  and Westwood have spoken to both owners about  it.

It is acknowledged that this engagement has been somewhat hampered by lockdown, however, this is an ongoing process and  therefore discussions  will also be ongoing.

Information about the project has been provided to both owners, and we would hope that both feel able to support this  project, which will help to  safeguard the river for the town.

Has the Town Council commissioned a  structural engineer  survey?

As part of the initial planning for the work, the weir  was  inspected and  its  worsening condition noted  over a period of time. As part of the  repair project, the weir will be  surveyed and a structural engineer will work on the specification and drawings.

What evidence is there that this work is necessary  now?

The visual inspections have seen a dramatic  deterioration  from last year, which if left unchecked, could cause the weir to fail, potentially  within the next 12-18 months.

Who commissioned the structural engineer survey if not the Town Council?

The Town Council is the lead organisation, and has commissioned a structural engineer to survey and draw up the scheme for the project.

Why is the Town Council and community investing money into fixing private property?

The result of not getting involved and letting the weir fail is the risk of a loss of the river, with the resultant  dramatic impact on the current ecology of the town, downstream from the  Town Weir  (upstream of the Town Bridge)  to  the  Avoncliff  Weir,  loss of amenity  for leisure activity, and  economic impact, deriving primarily from  the  aesthetic impact  and the knock-on effect on tourism.

Will this money be claimed back from the owners?

The donations have been made by the community to support this very important project for the town.  While we would welcome contributions from any party, including the owners, this is not an expectation.

When will the weir be fixed properly?

This project is aimed at providing a medium-term solution to an immediate risk a full reinstatement of the weir will be a matter for the owners.

Why isn’t the project looking to fix the weir permanently?

A permanent solution would be for the owners to provide. This project is to provide the temporary repair to safeguard the amenity of the river.

Where do the Canal River Trust (CRT) and Environment Agency fit into this?

The CRT do not play a part in regulation of this stretch of the Avon.  The Environment Agency has a role to play, has been consulted and is broadly supportive of this project.

Can ownership be transferred to the Council to safeguard it in the future?

This is not an option.   The Town Council will look at strategic future proofing against this issue, but that is at a very early stage.

Are there laws requiring the owners to fix the weir themselves?

While this would seem to be desirable, there is no law requiring them to do so.

Is the weir listed?

Does the weir have a fish ladder?

There are no fish ladders on either the town weir or  Avoncliff  Weir.  Our EA approval for the repair requires that we do not change the shape or size of the weir, primarily for flood risk considerations. A fish ladder would require additional design, cost and approval. This would cause delay which we can’t afford. Any additions for the well-being of a range of wildlife certainly should be included in any permanent scheme.

Why has the river level been so low the last couple of years? Is this due to holes?

It is unclear whether  the disrepair of the weir  has been a contributory factor, although it is a factor that the Town  Council is  looking at it in terms of the impact on the ecology of the river and amenity for the town. The  river level is also affected by environmental factors, and operation of downstream sluice gates.

Why is there no mention of the  weir owners in the previous article, and why do camera angles obscure the view their properties?

The two owners have a right to privacy, and it would not be appropriate to comment in detail on their level of involvement.  Both owners have been engaged by the project  in different ways, and at different levels depending on their individual choice.

How long have these temporary works been planned for? When did this start, and who instigated it?

The issue of the disrepair of the weir was first raised in  an  Environment and Planning Committee meeting  in  September  2019.  Discussions have been ongoing since that time with all stakeholder groups to try to establish a way forward.

More detailed planning commenced in early 2020, when the status of the weir became clear.  The Town Council agreed to become the lead agency on this in early July, to ensure the project was delivered within the necessary timescale.

Is the town being ‘held to ransom’?

The Council was first approached by the community with concerns about the weir; while the weir itself is in private hands,  its condition will have an impact on the town,  in terms of its identity and economy, as well as the ecology and amenity of the river itself. Therefore, the Council agreed with the proposal that it should assist.

Councillors will be looking to influence  the  longer-term strategic options to reduce future risks of this type.

If you have a further question about this project, please email office@bradfordonavontowncouncil.gov.uk