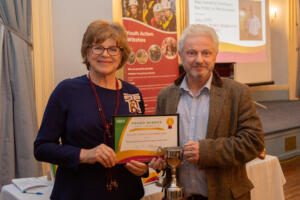 The Bradford on Avon borehole scheme has won an innovation award from Community First.

On Wednesday, 12 October 2022, the Chief Executive/ Town Clerk, Ian Brown, was delighted to collect the Most Innovative Community Project or Service award at the Community First AGM on behalf of John Griffin for the bowling green borehole.

The Bradford on Avon borehole project provides the bowling green and cricket square with clean, untreated water from ground sources.

The objective was to obtain untreated water from a borehole for watering the bowls green, cricket square and ad hoc use by Bradford on Avon Town Council.

John applied his civil engineering skills as a volunteer making an invaluable contribution to this innovative project.

Ian said: “The Bradford on Avon Bowls Club headed up the project in partnership with the Cricket Club, and Town Council with John as the Project Manager. In his role, John ensured the successful delivery of the borehole.

“During the project some unanticipated problems arose.

“Firstly, the planned area for the borehole proved too soft for the heavy drilling machine used by the contractors.

“John organised a new location immediately, in consultation with the landowner and stakeholders.

“The second issue was that contractors encountered salt water at 35m – a surprise to all concerned, as the geotechnical survey did not show this as a possibility.

“The aim was to reach aquifers at a depth of 60 to 80m. Working with contractors, John devised and implemented a plan which snatched the project from the jaws of failure.”

John resolved all technical and practical problems so that Bradford on Avon could have a fully-functioning watering system which does not use mains water. This has been especially valuable during the recent period of drought.