Thousands came to Westbury Gardens on a sunny Easter Monday to celebrate the return of the annual Duck Race.

This year was the first time since the start of the pandemic that Bradford on Avon Town Council has been able to hold the iconic event, sponsored by Puddle Ducks.

Attendees poured into Westbury Gardens early to enjoy the food, drink and activities offered by the incredible stallholders and entertainment, including:

During the day the Town Council ran a stall where the public could sponsor ducks for the race. When it came time to launch the contestants (ducks) our volunteers had sold out of all 1,000.

The Town Council had earlier decided to move the duck launch away from the Town Bridge to ensure the nesting swans were not disturbed.

As the morning grew warmer and the queue to sponsor ducks shortened – it was clear a change in launch plans was necessary. 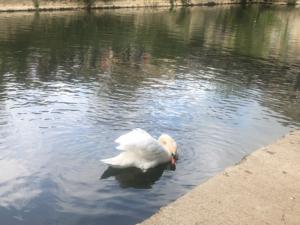 Bradford on Avon Town Mayor, Cllr Sarah Gibson, explained: “Unfortunately, with all the people around in the morning and all the activity, the male got very upset.

“We couldn’t risk the swan attacking our kayakers or that the female swan became so upset she left the nest.

“To ensure their wellbeing it became clear just before the launch that we needed to move the Duck Race slightly further down the river.”

Despite the setback, our rubber ducks floated happily towards their destination, where three winners were plucked out of the Avon.

There are fantastic prizes to be won, including:

If you are one of our winners, come down to the Town Council offices with your ID to collect your prize.

“There were not too many casualties and quite a lot of success from our ducks,” Cllr Gibson continued.

“It was noticeable which ducks were best trained – all of my efforts to train mine were a complete waste of time because one got stuck in the weeds.

“I’d like to thank everyone for coming and making this Duck Race a very special event.

“I’d also like to thank all those who helped put on the event and the community volunteers who helped marshal today.”

All 1,000 ducks were caught and returned by the Bradford on Avon Canoe Club.

Additionally, the Town Council would like to thank Puddle Ducks for sponsoring the event and Burbidge Electrical for helping ensure a smooth supply of power.

The Town Council would also like to thank Dible & Roy, Sally Narrowboats and Christopher Curtis for providing the fantastic prizes.