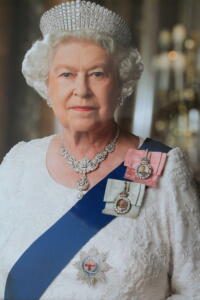 On behalf of the people of Bradford on Avon, the Town Council mourns the passing of Her Majesty Queen Elizabeth II and gives thanks for her life of service to the nation.

The Union Flag will be lowered to half-mast in Westbury Garden and residents are invited to share their memories of Her Majesty, Queen Elizabeth II in an online or physical book of condolence.

Bradford on Avon Town Mayor, Cllr Katie Vigar said: “It is with great sadness that we have learned of the death of Her Majesty, Queen Elizabeth II. She was held in deep affection and respect by people in this town and around the world.

“Her dedicated service as monarch was an inspiration to our nation and beyond for more than 70-years, and I know there will be a great sense of sadness in the town.”

Residents of Bradford on Avon are welcome to share their memories of Her Majesty in our online Book of Condolence or physically at the Tourist Information Centre.

This will give everyone an opportunity to express their own thoughts at how their lives were touched by Her Majesty.

The site for tributes in Bradford on Avon will be beside Millie’s Statue opposite Westbury Garden – the Mayor, Cllr Katie Vigar will lay the first tribute.

The main sites for tributes in Wiltshire will be Trowbridge, Chippenham and Salisbury.